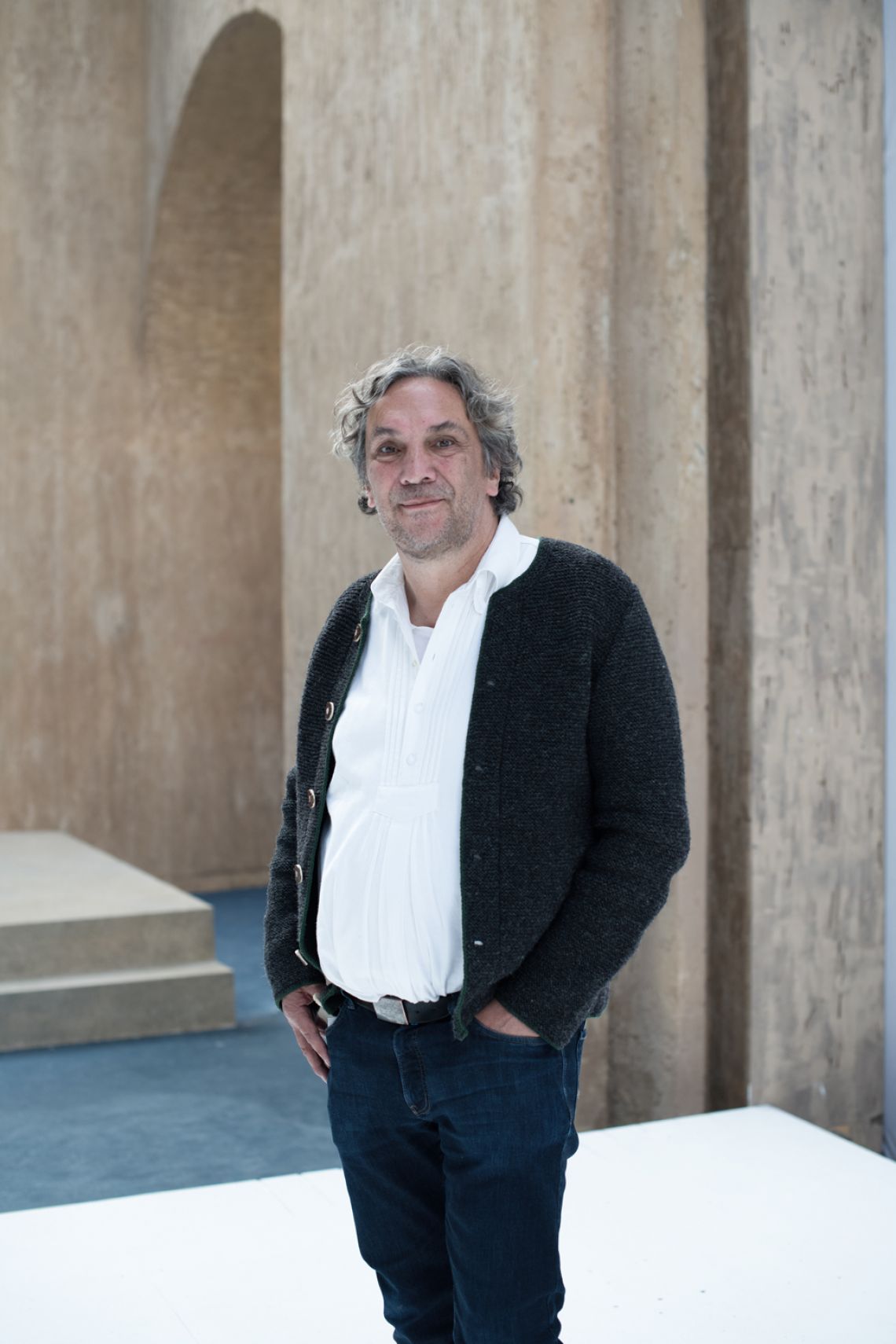 Born in Oberammergau in 1961. His career began in 1981, when he created his own drama group in Oberammergau. In 1987 he was elected play director of the Oberammergau Passion Play, which he will direct for the fourth time in 2022. Christian Stückl served as assistant at Münchner Kammerspiele in 1987, where the magazine “theater heute” elected him as best up-and-coming director of the year in 1991 for his first own directive work, the premiere of Werner Schwab’s “Volksvernichtung oder meine Leber ist sinnlos”. Stückl stayed at Münchner Kammerspiele until 1996 and then worked as a freelance director in Hannover, Frankfurt, Vienna and Bonn, among others. Since 2002, Christian Stückl has been the artistic director of the Münchner Volkstheater. In 2009, his staging of Hans Pfitzner’s “Palestrina” was first shown at the Bayerische Staatsoper in Munich and had a revival in 2012 at the Staatsoper in Hamburg. At the Salzburger Festspiele in 2012, he directed “Jedermann” by Hugo von Hofmannsthal for the eleventh and last time. In the season 2011/12 he directed Tankred Dorst’s “Merlin oder Das wüste Land” at Schauspielhaus Zürich and “Ariadne auf Naxos” by Richard Strauss at the Staatsoper in Hamburg. Christian Stückl has been directing a play at the Passion Play Theatre in Oberammergau every year since 2011: In 2011 Thomas Mann’s novel “Joseph und seine Brüder”, in 2012 Shakespeare’s “Antony and Cleopatra” and in 2013 “Moses”, a commissioned piece by Feridun Zaimoglu. In 2014, he directed “A Midsummer Night’s Dream” by Shakespeare in Oberammergau, in 2015 the opera “Nabucco” by Giuseppe Verdi, in 2016 “Emperor and Galilean” by Henrik Ibsen and in 2017 “The Flying Dutchman” by Richard Wagner. In 2018 he directed "William Tell" by Friedrich Schiller and 2019 "The Plague". In 2014 in Vienna at Burgtheater, “Bei Einbruch der Dunkelheit” by Peter Turini and in 2016, also at Burgtheater in Vienna, “Servant of Two Masters” by Goldoni. In 2014, Christian Stückl was awarded the Theatre Award of the State Capital of Munich. In 2020 he was awarded the Abraham-Geiger Prize as well as the Tolerance-Prize of the Protestant Academy Tutzing. 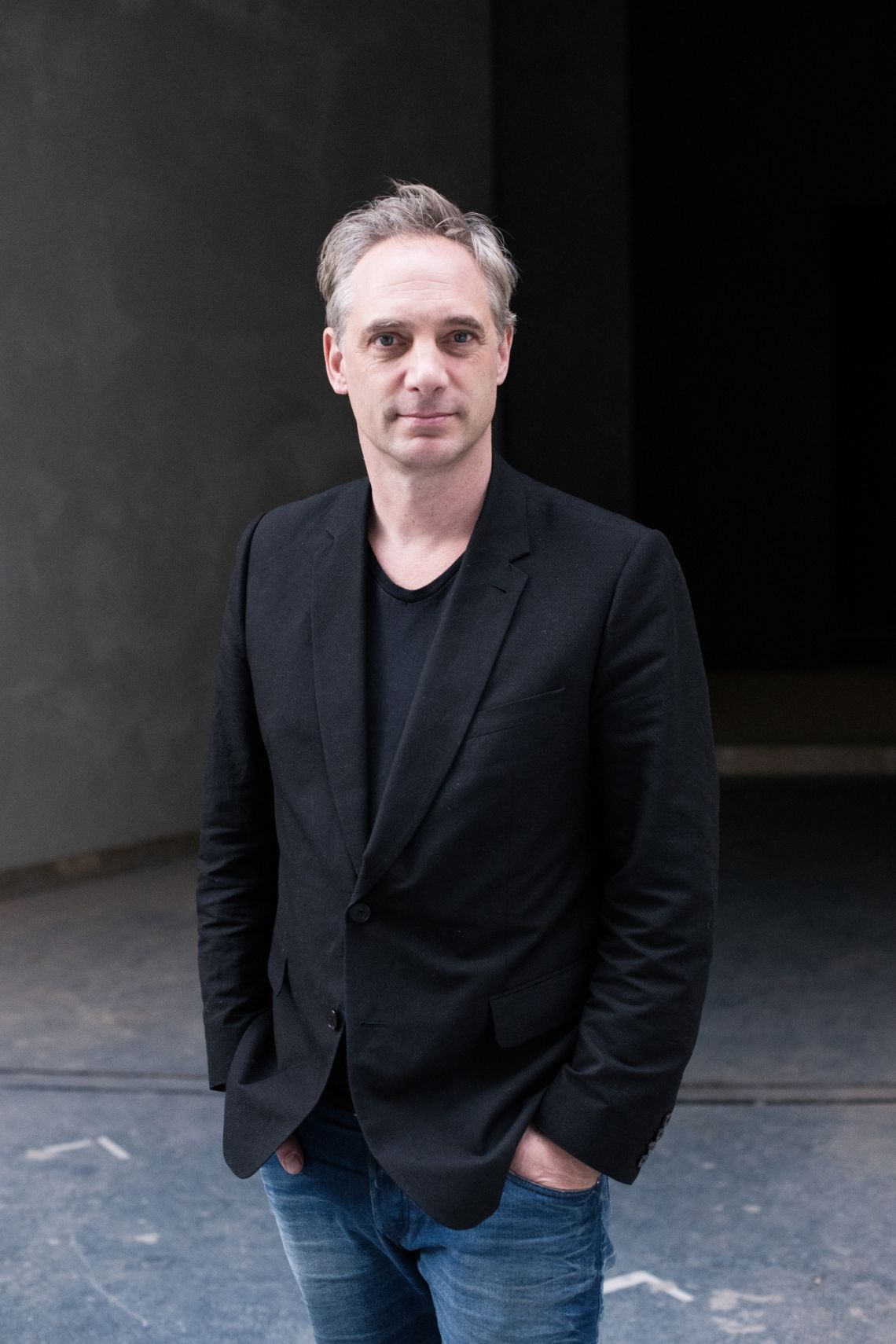 Born in Oberammergau in 1972. In 1991, Jürgen Rose employed the trained wood-carver as assistant at Münchner Kammerspiele. He has been working as a freelance stage and costume designer since 1996. Cooperation with, among others, the directors Robert Wilson, “Time Rocker” by Lou Reed at Thalia Theatre Hamburg, “Prometeo: “Tragedia dell´ascolto” by Luigi Nono/Massimo Cacciari, 1998, Opéra de la Monnaie, Brussels; “Steel Velvet” art installation Villa Stuck Munich, 1998. “14 Stations” art installation on the crossroad stations in connection to the Oberammergau Passion Play. During Dieter Dorn’s time as artistic director from 2001 to 2010, Stefan Hageneier was employed as stage and costume designer at Bayerisches Staatsschauspiel. Also employment at numerous German Theatres, such as Münchner Kammerspiele, Schaubühne Berlin, Berliner Ensemble, Burgtheater Vienna, Vienna Theatre, Bonn Theatre, Düsseldorf Theatre, State Theatre Hannover, Zurich Theatre, as well as at the State Operas in Munich and Hamburg and at Dortmund Opera. Cooperation with the directors Benedict Andrews, Florian Boesch, Harald Clemen, Dieter Dorn, Thomas Langhoff, James McDonald, Franz Xaver Kroetz, Yoshi Oida, Thomas Dannemann, Katharina Thoma and Tina Lanik. He and Christian Stückl look back on a longstanding cooperation: Stefan Hageneier designed the stage decorations and costumes for the Passion Plays of 2000 and 2010 as well as for the drama shows in Oberammergau, which are now shown every year. For instance: “Jeremias” by Stefan Zweig in 2008, “Joseph und seine Brüder” by Thomas Mann in 2011, or “Moses” by Feridun Zaimoglu in 2012, “Nabucco” by Giuseppe Verdi in 2015, “Emperor and Galilean” by Henrik Ibsen in 2016 and “The Flying Dutchman” by Richard Wagner in 2017. As well as 2018 for "William Tell" by Friedrich Schiller and 2019 for "The Plague".
Since 2011 Stefan Hageneier is professor for stage and costume design at the Kunsthochschule Berlin-Weissensee. 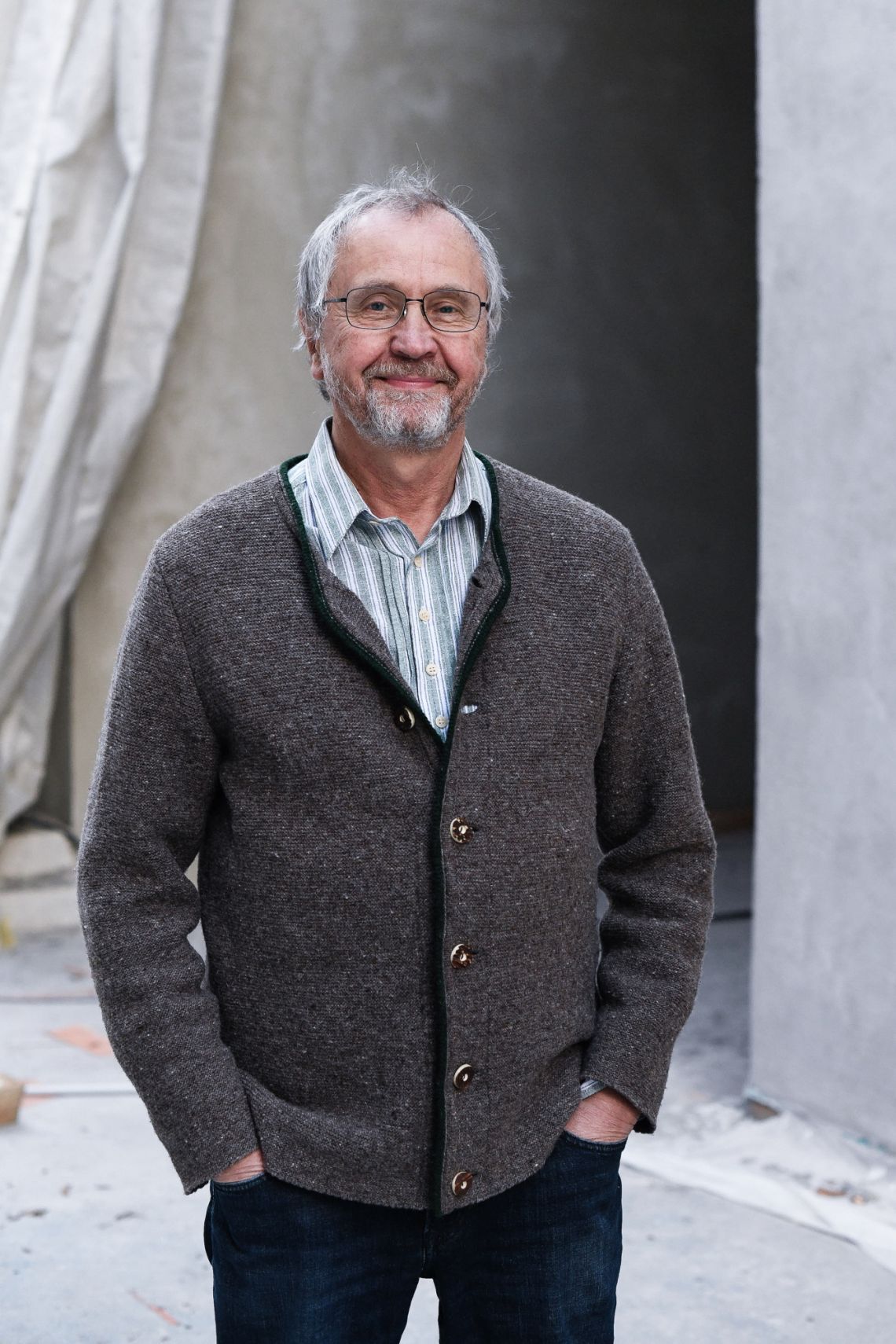 He was born in Oberammergau in 1956. Following his A-levels, he completed his studies in School Music at Mozarteum in Salzburg and at Music University Munich. Getting to know Nikolaus Harnoncourt and his concept of historic show practice proved fateful for Zwink, characterising his aesthetic and interpretational work from then on. Since 1984 he has been working in music pedagogy and organisation in his home village as the manager of several different choirs. Moreover, he worked as music teacher at Benediktinergymnasium Ettal until 1997 before focusing all his attention on preparing the Passion Play 2000 as its music manager. Markus Zwink has accompanied Christian Stückl’s theatre productions for many years, for instance in shows at Münchner Kammerspiele and at Münchner Volkstheater. In 2002, he wrote the music for “Jedermann” at Salzburger Festspiele. Markus Zwink was also involved in the following other productions: “König David” in 2005, Stefan Zweig’s “Jeremias” in 2007 and “Die Pest“ in 2009, all directed by Christian Stückl. In 2010, he again assumed the task as music manager of the Oberammergau Passion Play. For the annual theatrical productions in the Passion Play Theatre since 2011, he wrote the music for “Joseph und seine Brüder” by Thomas Mann and in 2012 for “Antony and Cleopatra” by William Shakespeare as well as for Henrik Ibsens drama “Emperor and Galilean” in 2016. Markus Zwink will act as music manager again for the Oberammergau Passion Play in 2022. 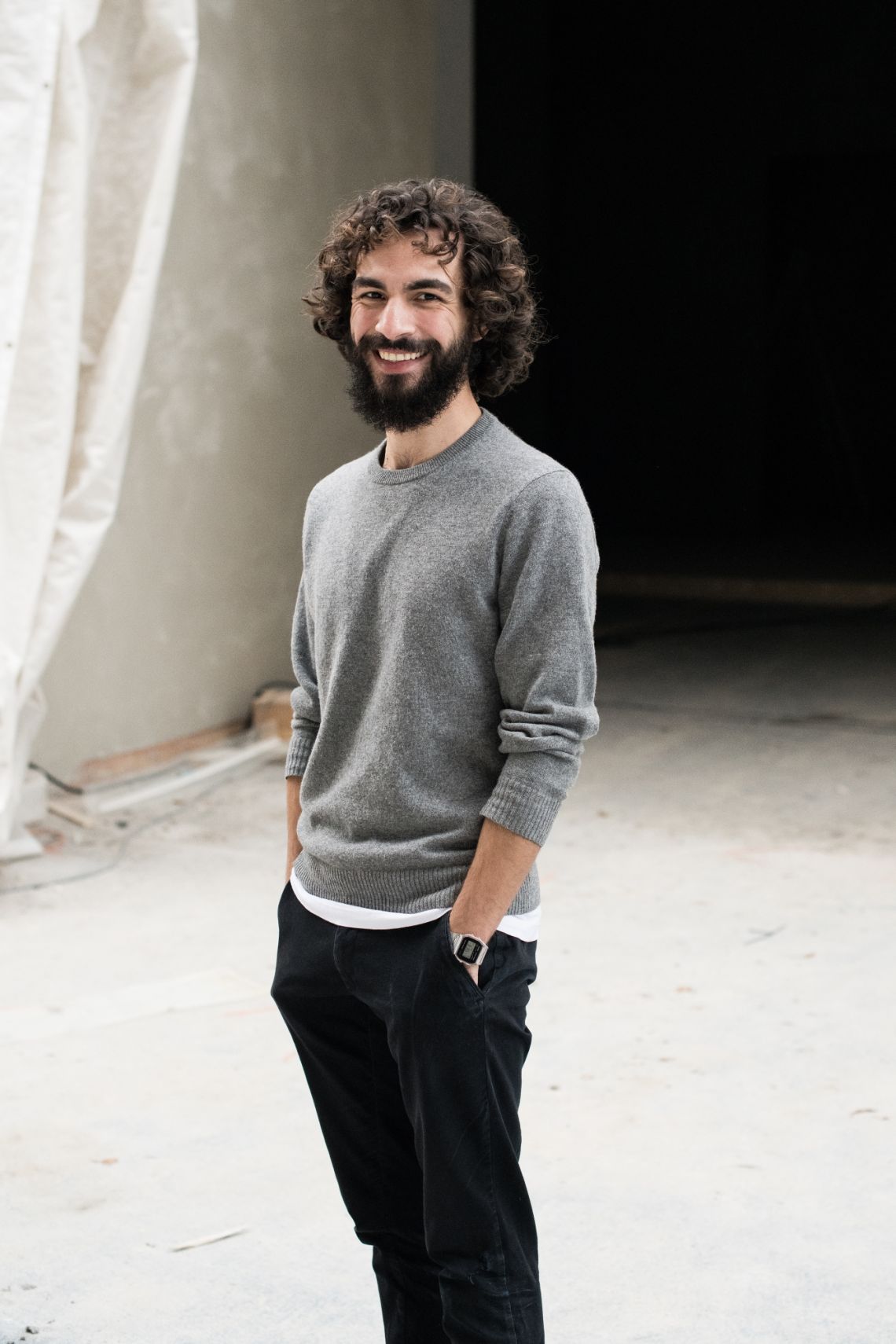 Abdullah Kenan Karaca was born in Garmisch-Partenkirchen in 1989. Following his A-levels, he became assistant director at the Münchner Volkstheater in 2009 and worked as assistant director at the Salzburger Festspiele for “Jedermann” directed by Christian Stückl. In 2011, he acted as assistant to Christian Stückl in the production “Joseph und seine Brüder” based on the novel by Thomas Mann at Passion Play Theatre in Oberammergau. He acted as assistant at, among others, Simon Solberg, Bettina Bruinier, Christine Eder. In 2012, he directed “Arabboy”, in 2013 “The Great Gatsby” and in 2014 “Woyzek”. He studied directing at the University for Music and Theatre in Hamburg. During the theatre summer in Oberammergau, he directed “Romeo and Juliet” by William Shakespeare in a circus tent next to the Passion Play Theatre and in 2017 “Die Geierwally” by Wilhelmine von Hillern. In 2022, he will become deputy play director of Oberammergau Passion Play along with Christian Stückl. He is the house director of Münchner Volkstheater.